Leaning Tower of Pizza by Lucy

Now that we are in Italy, we can have pasta, pizza, and gelato without my parents’ idea of guilt. When you’re in Thailand, you have curry and chicken with rice on the side. In China, you have sweet and sour pork with dumplings and noodles. In Spain, you have bocadillos (sandwiches) and tapas. In Italy, you have gelato for dessert–unless you want Japanese bean paste! We saw a demonstration of gelato being made at a Florencetown cooking class, and we made pizza there, too!

Daniel demonstrated how to make the pizza first. He was a good chef with practice and had knowledge about making pizza. On our table, we made a ring of flour and put water with yeast in it.  It was the size of an Olympic swimming pool–if the Olympic champion were an ant!  We mixed the flour and the water, caved in the ant pool, and created the dough. Then we shaped it into ant boulders (or dough balls). We put olive oil on them so the air could not enter and they wouldn’t dry up. Then we left the boulders and went to learn how to make gelato. 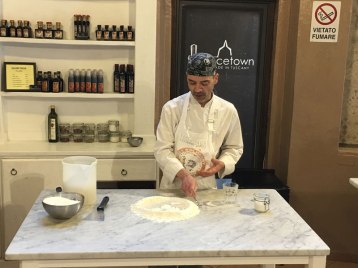 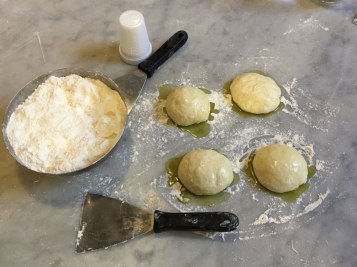 The gelato was going to be chocolate. Natalie mixed egg yolk and sugar, and I mixed chocolate into heated milk with cream. Eventually everything got mixed together, and before we put it in the gelato-making machine, we tasted it. It was yummy. It sort of smelled like my mom’s chocolate brownies and tasted like pudding or fudge. When it was ready, it was even better,  But we had to finish making our pizzas before we could eat it. 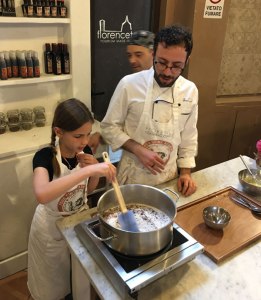 mixing chocolate with milk and cream 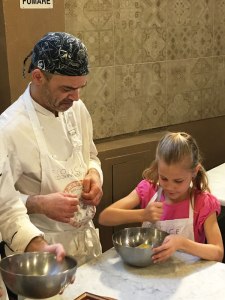 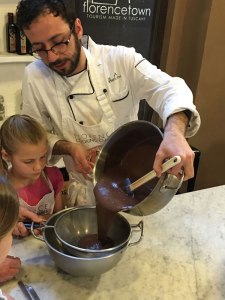 Getting back to our dough balls, we flattened it and made a circle, first with our fingers, then with our palms. Once it was finally the right size, we covered it with the toppings we liked. Three spoons of tomato sauce, a few handfuls of mozzarella cheese, oregano, too. Natalie put some onions on hers, and Mama added spicy salami. She thought it was too spicy. When I tried to pick up my pizza with the shovel-sized spatula, it broke in the middle. I started over with Daniel’s dough, rolling it and dressing it in a casual Margherita dress.  (Legend has it that Margherita pizzas are named after Queen Margherita who visited Naples in 1889.  The queen particularly liked a pizza that was made for her that had the colors of the Italian flag:  red (tomato), white (mozzarella) and green (basil).) 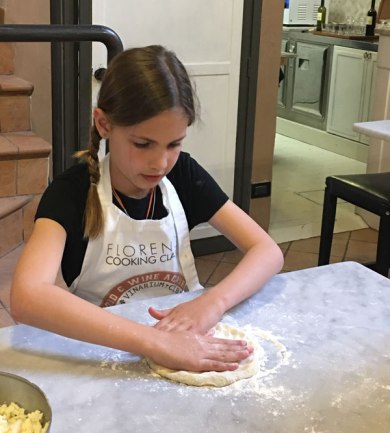 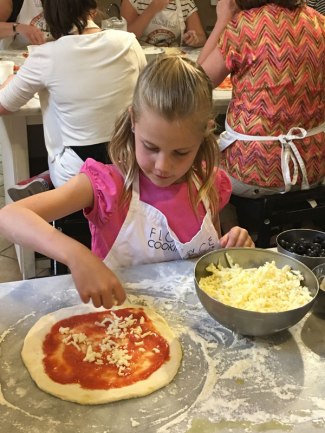 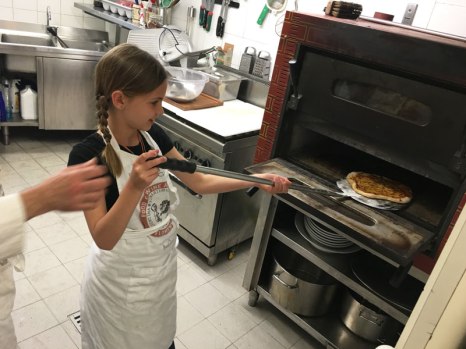 out of the oven 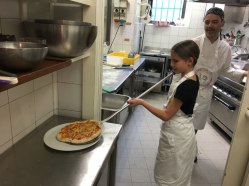 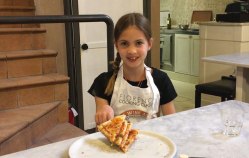 When we finished making the pizza and it was out of the oven, we had my almost-favorite part–eating!  My pizza was probably the best in the universe and way farther than that.  And for the people out there who are now really hungry, I’m going to tease you a little. The gelato we made was sooo awesomely, fantastically great! 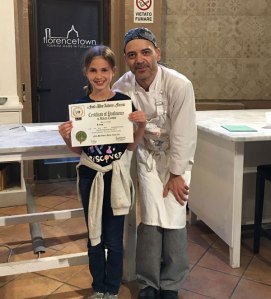 Then we got our diplomas. Finally we have graduated from the “Wanna be Italiano” Florencetown cooking class. What a great way to spend dinner in Italy! And very educational, too.

In case you haven’t seen these pages yet…

And finally, we wanted to share the sound of waves pulling back through the rocks on the beach in Nice, France.