Have you ever heard of Anne Frank? She was a 13-year old girl who hid from the Nazis in Amsterdam for two years in a secret annex.  The secret annex was actually four rooms in the back of her father’s office building. While she was hiding, she kept a diary. Later she heard on the radio that documents of the war might be published. She began to edit her diary after she heard this because she wanted it to be published. 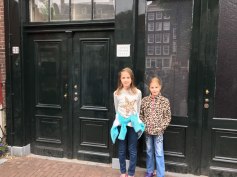 by the front door

by sculpture of Anne Frank

The Franks had many difficulties while in hiding.  Did you know that Anne shared the annex with seven other people?  Her parents, her sister Margot and four others.  They couldn’t open the windows or look outside.  Food was scarce.  They had to try their best to not go to the bathroom too often because they were afraid of someone hearing them flush the toilet.  At school, Anne was a chatterbox. In the annex, you couldn’t speak any louder than a whisper, because if someone heard you, you’d be caught and sent to a concentration camp. In the diary she wrote, “We have to whisper and tread lightly during the day, otherwise the people in the warehouse might hear us.”

Four people who worked for Otto Frank, the dad, helped the people in the secret annex by giving them food and everything else they needed to survive.  But eventually, the Franks were betrayed, and no one has ever found out who it was that betrayed them.  Everyone in the annex was sent to concentration camps.  Anne and Margot died of typhus just months before the end of the war.  Otto Frank was the only survivor.

We went to the secret annex. The rooms are now empty, but the walls still had photos and magazine pages that Anne had cut and pasted to decorate her room. When the museum was created, Otto Frank wanted to keep the rooms empty to represent the fact that people were taken away, never to come back.

One of the helpers had saved Anne’s diary, and she gave it to Otto when he came back.  He published it, and now it has been translated into over seventy languages.

I am glad the book was published because it shows the hope and inspiration of a young girl.

And on a lighter note, in case you missed these