In Chiang Mai my family and I went to a zipline called Flight of the Gibbon. I was really, really excited to go on the zipline. I didn’t want it to end. I want to go again sometime soon.

We had to drive one hour to get to the course. I mostly looked out the window to see more of Chiang Mai. When we started the zipline, it was really cold.  Then it started to get warmer in the afternoon. My mom took a lot of pictures while on the zipline.

While walking between stations, we saw a family of gibbons. They were really cute. (See Lucy’s animal page.)

The zipline had a lot of different parts. My favorite part was superman. Superman is when you lie facing down and the hook is hooked to your back. It was really, really fun because it was really fast. At the end of superman you had to climb up a net to get to the platform to go on the next zipline. On another part of the zipline I went with Lucy.

The longest part of the zipline was really long. It was over 800 meters long! On that one I rode with the skyranger to make sure I got to the other end.  Lucy had to go with a ranger, too.

At the end of the last zipline we went abseiling. Abseiling is when you are lowered straight down on a rope. After the zipline we drove to a waterfall. The waterfall was really big and the water was clear. 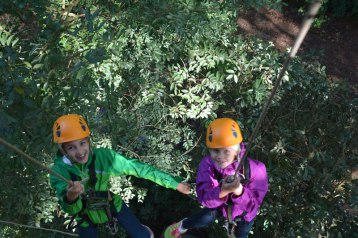 Finally, we drove one hour back to the hotel. It was a long drive but a fun day! Next stop, Phuket!