Glad to Not Be a Gladiator by Nati

In Rome, we had a gladiator class.  First, we put on special robes.  Then a man whose Latin name was Glannicus lead us to a gladiator museum and explained about gladiators from different parts of the Roman Empire.  After the museum, we went to a small arena where Glannicus told us to warm up before we started. In the warm-up, we had to run around a tree, jump over a rope side to side, dodge swinging sand bags and do a somersault.  Then we had to lift sand bags and throw them around a circle to each other.  If one of us dropped it, all of us had to do push-ups. 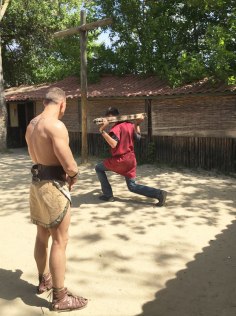 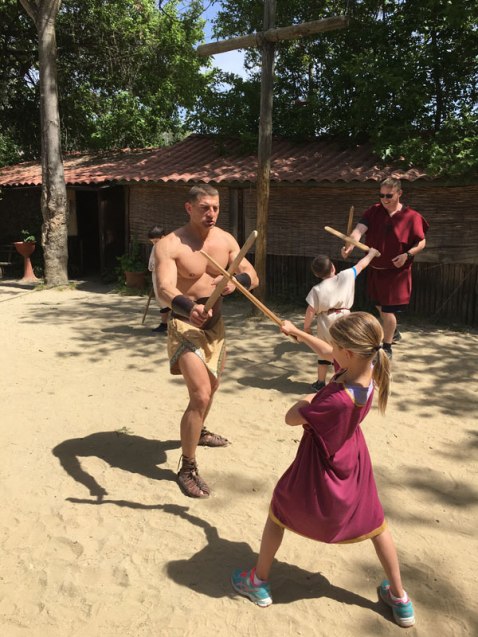 When we were done with the warm up, Glannicus taught us some moves that the gladiators used to do with hands and with swords. After the lesson, he told us that we could fight with soft swords and shields. The first one to touch the other person eight times won.  First I played with Lucy, then I played with two other boys.  At the end of the class, we got a certificate with our Latin names. Mine was Nemesis. 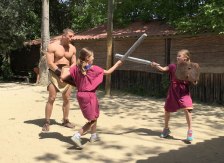 fighting with another gladiator 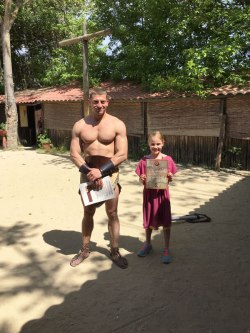 After the gladiator school, we went on a tour of the Colosseum. On the tour, we learned that one type of gladiator that fought in the arena was called “scissors.” Scissors are a type of warrior that fought against warriors with nets. The scissors are called scissors because they have a cap on one of their hands that is used for cutting through nets.  They also had a knife in the other hand.

The gladiator school was fun and interesting. I really liked it, but I’m glad I’m not a gladiator.